Whew! Another whirlwind of a trip. I’m sitting in the the Atlanta airport (someone please remind me NEVER to fly in/out of Atlanta again!) after a quick weekend trip to Anderson, South Carolina, for yet another REV3 event. It was the next-to-last stop for the 2012 REV3 Pro Series and promised to be a real humdinger of a race. Current series leader Nicole Kelleher was on the start list, as was last year’s 2nd place finisher Tenille Hoogland of Canada and a handful of wild-card ITU ladies. I knew going into the event that it was vital for me to have a strong performance to have any chance at moving up in the overall series standings.

I arrived in Anderson on Friday night and was reunited with my friends Todd Lucas, Trish Graham, and Carin VanderKlok at the lake house that we rented for the weekend. It was a really cool house with an outdoor TV and fireplace (never seen that before!) and was located just across the water from the swim venue. Saturday was the usual pre-race business, starting with an interview at 9am with Simply Stu and Dennis and followed by a little bike & swim, the pro meeting at 12:30 and the pro panel soon afterwards. I always like to drive the bike course even if I’ve done the race before to remind myself of any tricky spots, so I did that in the afternoon before heading back to the house to organize gear and squeeze in a little pre-race Recovery Pump time before winding down for the night. Of course, I got caught up in watching the excitement of the Kona race coverage online so I didn’t actually get to sleep as early as I would have liked to—but it was worth it to see the women battle it out on the run!

Race morning was dark and a bit overcast, but I was surprised by the relatively balmy air temperature and lack of wind. The day before had been pretty windy and there was a bite to the air; in contrast race day was perfectly calm. I would have been happy with rougher weather but knew that the course itself was tough and would present a good challenge even in mild conditions. The water was measured at just below 68 degrees so it was wetsuit legal for everyone. After some good A.R.T. bodywork with Dr. Kevin Maggs the day before my arms felt nice and loose for the swim. I positioned myself to the outside for the beach start and had a fast run-in despite a slight stumble when I hit the water, then was able to throw in some quick dolphin dives before settling into freestyle. 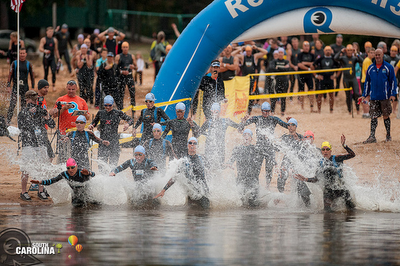 The swim start. I’m on the far right in the yellow swim cap with my arm up in the air (it was the stumble). Photo by Nils Nilsen.

The stretch to the first buoy was a bit frantic with jockeying for position, but we mostly got ourselves sorted out soon after the first turn. I found a much better rhythm than last week in Maryland, but unfortunately I wasn’t able to hold onto the feet of Tenille or speedy ITU swimmers Jennifer Spieldenner and Anna Cleaver, and I ended up swimming solo for most of the course. I hit T1 between 45-60 seconds down from the leaders, a HUGE improvement over last year on this course so I was happy with that. 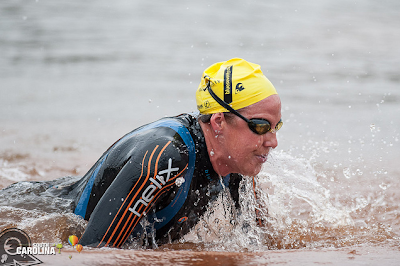 Looking like a seal exiting the swim. Photo by Nils Nilsen.

There is a notable uphill within the first mile on the bike and I could see a clump of riders up ahead. Some of them were pro men but I knew the ladies had to be up there in the mix and I settled down to work to catch them. The hills and the rhythm of this course really suit me and I was able to overtake the lead by Mile 10 and held it through the end of the bike. I knew Nicole would be strong on the run, and Tenille and I had run similar splits on this course last year, so my strategy was to build a lead on the bike and try to hold it on the run. By the end of the ride I had a 45 seconds gap over Tenille and about a 4 minute cushion over Nicole. More than I expected, but definitely not enough to breathe easy! 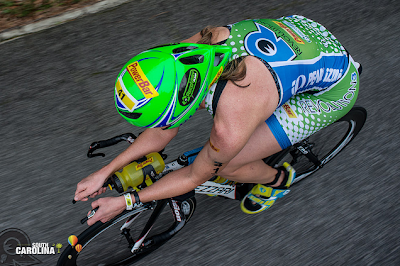 Birds-eye view of the bike. Photo by Nils Nilsen.

The run course this year was a little different, consisting of two constantly up-and-down loops. I enjoyed the run but boy was it tough! I was able to maintain the lead through the first six miles, then Tenille came up on my shoulder right at the end of the first lap. We started the second lap virtually together, then Tenille powered ahead at the top of the first hill up from the parking lot. It wasn’t long before Nicole came zipping by and I found myself running in 3rd place. I tried to keep within striking distance of these ladies, knowing that this type of run course can get the best of anyone and that it wasn’t over until the finish line, but I wasn’t able to make any sort of comeback in the latter stages of the run and had to settle for the bronze. 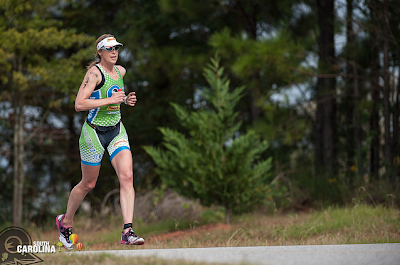 Tackling the hills on the run. Photo by Nils Nilsen.

Overall it was a great effort, though it fell a little short of what I needed to do to make a big jump in the overall REV3 Pro Series. After this race I’m sitting in 3rd place, less than 200 points out of 2nd and only 45 points ahead of 4th. Talk about not having any breathing room! The grande finale at Venice Beach, FL, in two weeks is shaping up to be a real showdown. The course in Florida is pancake flat which should make for a completely different dynamic from the other REV3 events. Should be interesting—wish me luck! 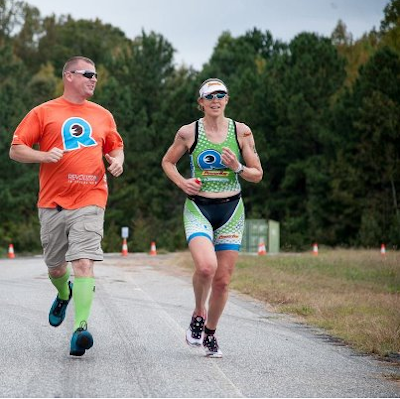 Running with Charlie, a.k.a. The Ultimate Photo Bomber. Photo courtesy of Charlie Patten.

After the race I got to hang out with my friend Brittany Banker, who I’ll be staying with in Florida, and to catch up with some of the other pro ladies including my REV3 teammate Jacqui Gordon. Unfortunately Trish and Carin had to go back to North Carolina, but Todd stuck around and we went to a BBQ at Tenille’s homestay and met some really lovely people from the local triathlon scene. I love southern hospitality! It was a really nice way to cap another great weekend. 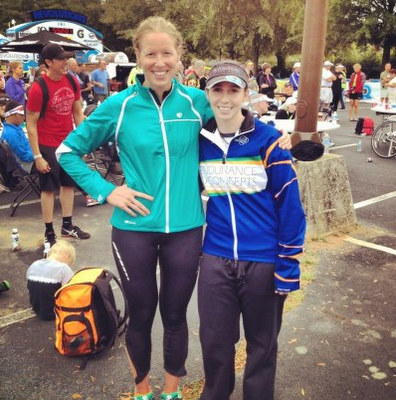 Congrats to Nicole on another stellar REV3 win, to Andrew Starykowicz for a dramatic comeback to the racing scene, and to all the finishers for their achievement on the day. If you haven’t tried a REV3 event yet—you are seriously missing out! You won’t find a more friendly, helpful, accommodating staff anywhere else, and the organization runs like a well-oiled machine. Thank you REV3 staff, volunteers, spectators, and other athletes for the incredible support along the course; to my sponsors REV3, Powerbar, Recovery Pump, Pearl Izumi, Blueseventy, Rudy Project, Fezzari, Maxxis, and The Bike Shoppe for supporting me in my athletic dreams; to the Sequined Thongs for the AWESOME whoops and hollers; to Brittany for the cheers & pics; to the other ladies in the pro field for a fair and honest race; and of course to Albert for flying solo with the dogs again for the second weekend in a row. Paybacks are on the horizon, I promise!

About the Author: Malaika Homo